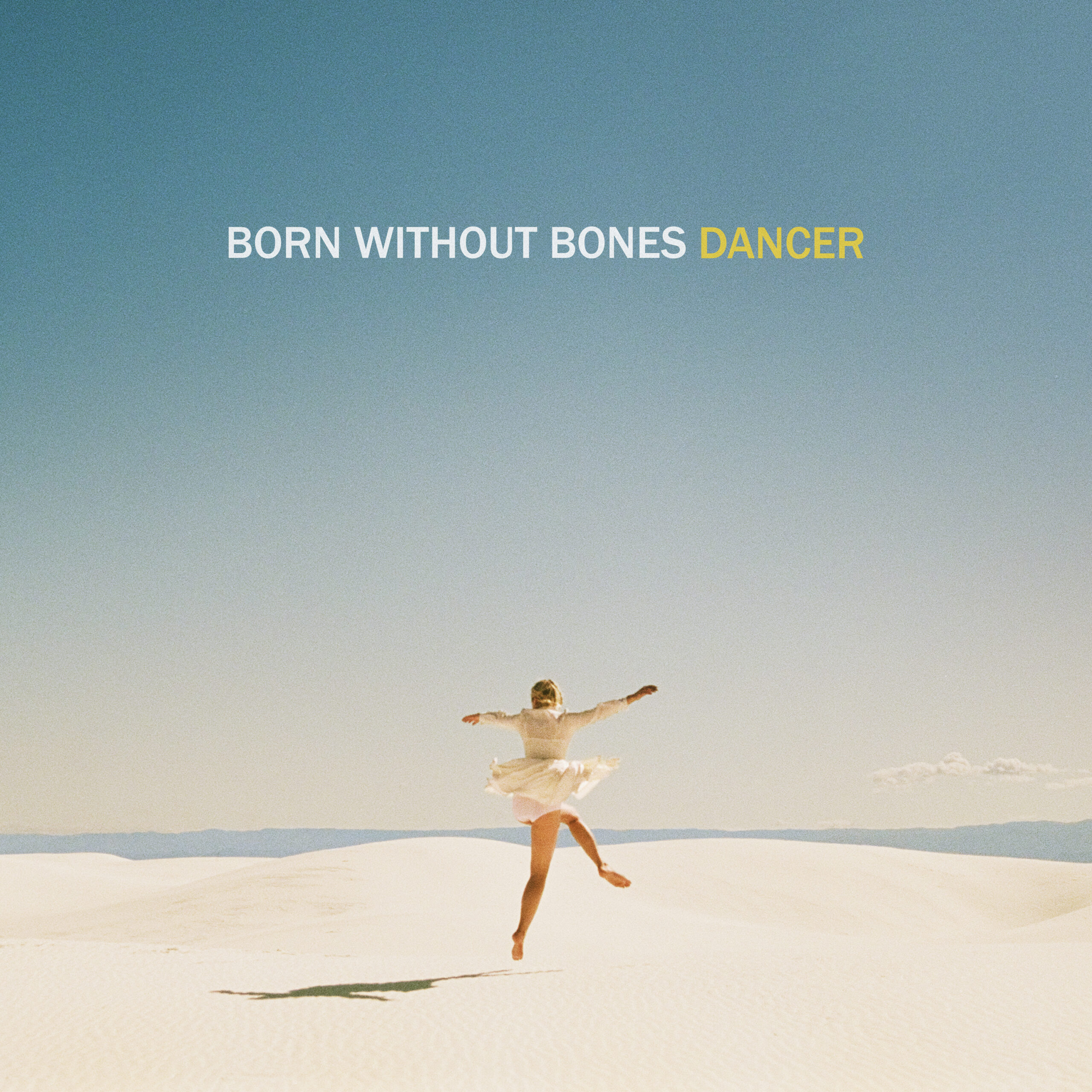 Born Without Bones Announce New Album Dancer Due Out 11/04

Massachusetts’s finest indie punk outfit, Born Without Bones, have returned to announce their upcoming new album, Dancer, due out November 4th from Pure Noise Records. Since their formation, Born Without Bones have put together an impressive catalog that ranges from heart-on-sleeve punk, to biting alternative rock, to sweeping indie, and more. Now on Dancer the band sound undeniably like themselves, bridging all of their different influences into their own distinctly hook sound. Produced by Mike Sapone (Oso Oso, Taking Back Sunday, Cymbals Eat Guitars), Dancer is bursting at the seams with massive melodies and personality to spare.

Born Without Bones have shared the album’s lead single and title track, along with the first in an ambitious series of music videos. Starting with a prologue scene set at a contentious family dinner, the “Dancer” music video kicks off a “choose your own adventure” style storyline that explores different characters and themes that appear throughout the album. Opening with an attention-grabbing four part harmony, the track wastes no time getting to an absolutely massive chorus that perfectly introduces the listener to Born Without Bones’ ability to stack hook upon hook.

Vocalist/guitarist Scott Ayotte discussed the band’s upcoming slate of music videos and some of the themes of “Dancer,” saying:
We filmed three videos along with a dinner scene. The concept is that each of the three videos stars one of the three daughters in our ‘family’ as they spin off into their own interests and paths. The dinner scene sets up the storyline to allow for each of the three daughters to set off on their own story. In the first installment you’ll follow the character of Dancer on her journey around Worcester, MA looking for acceptance. Follow along in the coming weeks to see where her sisters Bee and XO venture off to after their Sunday dinner.”

With this first song, I wrote the verse and chorus and then when I reflected on the lyrics I started to imagine this character: the Dancer. I imagined a person who had left home to try and carve out a place for themselves in this world. They found themselves in a place where they were appreciated for what they do, not who they are. I thought maybe Dancer grew up in the desert, a barren place where you really have to look for life. She had left hoping to escape and find herself in a place beaming with life. Maybe her parents had passed on and left her the house she had grown up in back in the desert. She had never found true love or acceptance in her journey because she wasn’t really running towards something, she was running away. She decides to move back home to the house she inherited and it’s not clear if she’ll face her demons or succumb to them.”

On Dancer, Born Without Bones prove that their songwriting chops are sharper than ever. Throughout the lushly arranged album, the band incorporate different chord changes and textures that manage to feel both surprising and satisfying all at once–and never a second away from a big hook. Started as Ayotte’s solo project, Born Without Bones’ lyrics have tracked his growth from his early 20s all the way to the present, and now Dancer explores the strange mix of contentedness and conflict that comes with being a fully-fledged adult. The album tackles existential themes by incorporating storytelling into Ayotte’s more autobiographical moments and always tapping into an uncommon sense of emotional honesty. “We each have so much invested into Born Without Bones,” he explains. “Sometimes it’s a cloud raining on us, sometimes it’s a bright sun that makes for a beautiful day that we can share with our friends and families. Making Dancer was three years of writing songs and learning about ourselves. Dancer is the hardest I’ve ever worked on anything in my life and it made me work harder on myself as a person, a creative, a bandmate and a friend.”

Biography:
There’s a song called “Sudden Relief” on Dancer, the new Born Without Bones album, that’s unlike anything vocalist/guitarist Scott Ayotte has ever written before. That’s not because of the evolution of the Milford, MA outfit from solo project to fully-fledged band, either. Guitarist Jonathan Brucato and bassist Jim Creighton have been a part of the permanent line-up for a long time now, and Super American’s Sam Checkoway – who played on last year’s re-recorded retrospective EP, Pictures Of The Sun – was behind the kit for the whole record, the first time in the band’s history that that’s happened. This goes even deeper. It’s the first time that Ayotte has written a love song that’s not about love going or having gone wrong. Quite the opposite, in fact. “It’s written not from the perspective of having lost love but having gained love,” he explains. “Before, I didn’t write about any relationships until they were over, and it wasn’t usually in the most positive way. But this is a positive song I wrote for and about my girlfriend. Even though it says the nice things about her, I decided to keep in the not so nice things about me – because she’s also signing up for those. Luckily, she’s loving of both.”

That turnaround in romantic fortune doesn’t mean, however, that this album is devoid of the emotional anguish that has been an integral part of Born Without Bones since the frontman formed it in 2010. It’s just that perspectives have shifted slightly, and the instability he feels now concerns other areas of his life. Indeed, it’s actually being in the band, and the consequences of that, that weighs heavily on this record’s 11 songs. Whereas Pictures Of The Sun was a present day reconstruction of five songs from the band’s past, this record sees Ayotte reflect on and take stock of that past, especially Scott’s fears and struggles after the release of both 2013’s second record, Baby, and 2017’s third full-length, Young At The Bend. The response to both was so disheartening for Scott, in fact, that an existential crisis of confidence ensued after the release of the latter. “We did a good bit of touring after Young At The Bend came out,” explains Ayotte, “but it just seemed it wasn’t connecting with people. We’d felt the same way when Baby had come out, so we were sort of expecting some sort of gradual increase in people being interested in the band, but it also just seemed that no matter what we did, it wasn’t really connecting with people.”

Even 18 months after that album’s release, Ayotte still felt that way. He couldn’t shake it. And so he left the band (“I didn’t quit the band,” he stresses now, “it was more that I didn’t know if the band was working”). In that time away, something weird happened, Born Without Bones started gaining momentum like never before. Baby – which was self-released, but has since been reissued by Pure Noise–found a whole new audience. The band still can’t put their finger on what changed in that year away from playing shows, but actor Elliot Fletcher posting a cover of their song “Stone” to Twitter might possibly have had something to do with it. Whatever the reason for the increased attention, it got the trio “re-excited about the band, because we were all kind of down in the dumps about it.” Just as importantly, it also ignited something in the frontman’s head. “In that time I wasn’t in the band,” he says, “I kept reflecting on this idea that became the Dancer character. The Dancer character, to me, is someone who is appreciated for what they do but not for who they are. And I started to have some really weird feelings about all of that. All of a sudden some people started talking to me in a different tone because they’d maybe heard through the grapevine we weren’t doing anything and possibly weren’t doing anything ever again. And that rubbed me the wrong way.”

Being celebrated for what you do and not who you are (and getting rid of the toxic people in your life who do that) is one of the central themes on Dancer, alongside a loss of a sense of home – something inspired by Ayotte’s parents selling the house he grew up in – and intentionally trying to better yourself as a human being. It’s a combination that results in something of a psychological headf*ck, all of which is channeled through what is undeniably Born Without Bones’ poppiest album yet. It kicks off with the Beach Boys-esque melody of the title track – though listen carefully to the lyrics and you’ll hear a darkness beneath the surface – before the emphatic, soaring rock’n’roll of “Don’t Speak” offers a burst of redemption in the face of a distant past. Elsewhere, “Get Out” sounds like a hazy, golden desert sunrise shimmering on the horizon of the past, “Heart At Home” is a gentle but constantly swelling ode to acknowledging trauma, even if it doesn’t quite have the guts to confront it, while “XO Skeleton” is a jubilant modern emo-rock anthem about putting on a brave face when everything is falling apart. But then “Show On The Road” is a defiant yet tension-filled song about being on the other side of that trauma, and running gleefully away from it as you hold the love of your life’s hand tightly in yours. It’s the perfect prelude to “Bother You” the jubilant penultimate track that, like “Sudden Relief”, celebrates the joy of love and the hope of a future with someone significant in it. It’s followed by the poignant, intensely emotional “Bar Harbor”, which Ayotte says sounds a bit like Death Cab For Cutie, but that’s doing his band a disservice. It sounds like the quintessential Born Without Bones song – loud and quiet, gentle and intense, hopeful and melancholy, all at the same time, its crescendo exploding like the memory of the first time you saw fireworks.

Much as all of that is played out in the lyrics, it also manifests itself in the fabric of the music. That’s the result of Born Without Bones interrupting the album’s recording session – with Mike Sapone (Oso, The Front Bottoms) at Ghost Hit Recordings in West Springfield, MA – to make Pictures Of The Sun there too. That retreat into, and reconstruction of, the past (with producer Andrew Oedel) allowed the band to be more intentional, giving them more freedom to play with the structure of these new songs. The result is Born Without Bones really embracing who they are by making a deliberate and concerted effort to get there, all of which is amplified by Vince Ratti’s sumptuous mix. It took a lot of hard work and self-reflection to get there, but it doesn’t sound like it. In fact, it sounds like these songs were already there in the ether, just waiting for the band to bring them to life.

“You want every song to feel like it grew out of the ground exactly that way,” explains Ayotte, “but through this process I learned that if there’s a song you believe in but something’s not working about it, you have to rip its heart out and put a new heart in. It might die on the operating table – that’s the risk that you take – but it also might give it a whole new life. “Bar Harbor” and “Get Out” were exactly like that. It’s like a pretty Frankenstein’s monster – I finally found the right arm and the right leg to go with the head. I’d never done that before. I was usually the type of songwriter to just write the song and do minimal edits, so this was very different. It was a lot of work, but this is the first album we’ve ever made that I’m not afraid to show people – and that feels really good.”