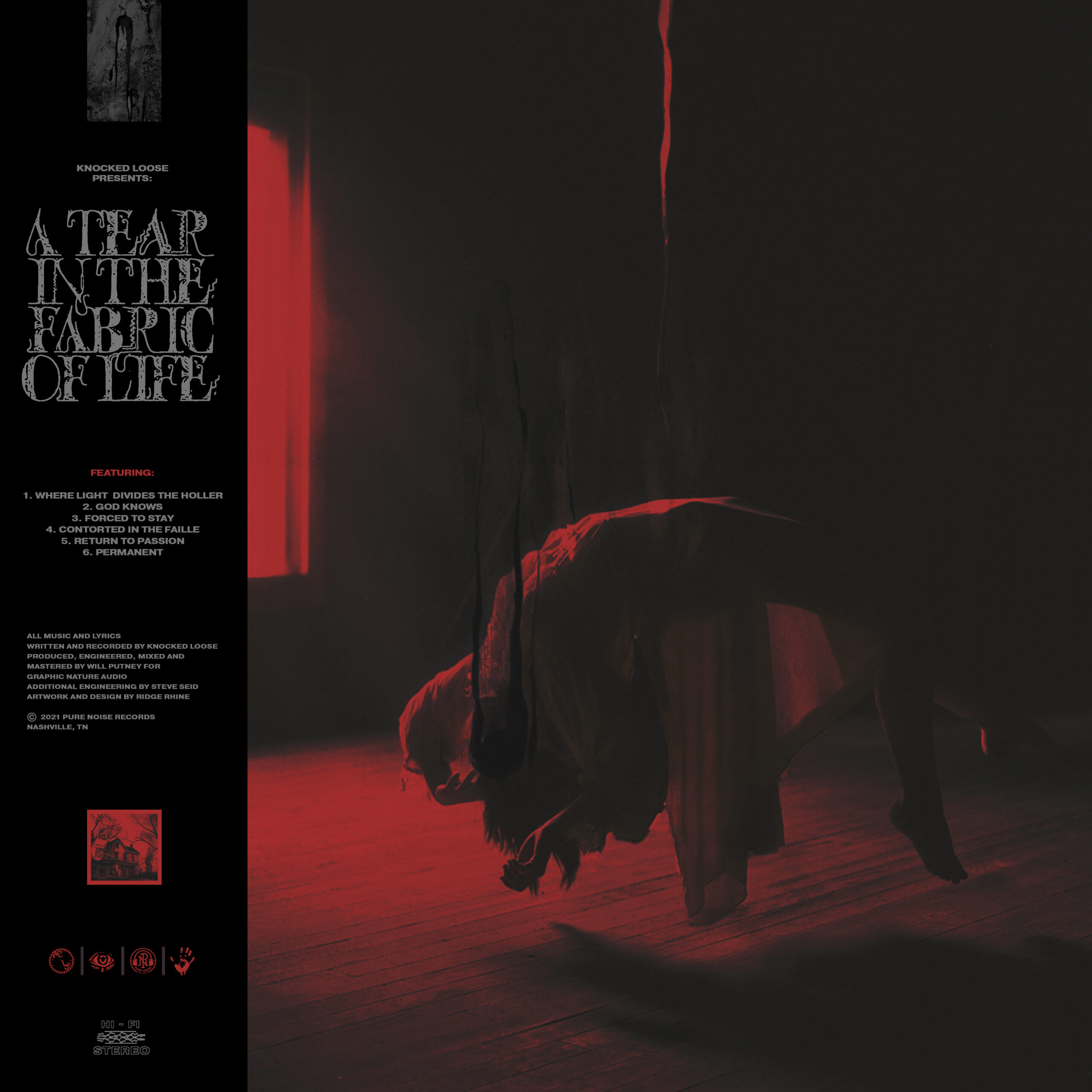 Knocked Loose have released their stunning and visionary new EP in full today – A Tear in the Fabric of Life. It’s their most dynamic and contained offering to date, and a balancing act: a mid-length EP with grand ambitions and scope, one full of new sonic elements and a cohesive aesthetic that hangs onto Knocked Loose’s trademark anthemic delivery.

A Tear in the Fabric of Life is a story written by Knocked Loose frontman/lyricist Bryan Garris and comes to life within an extraordinary animated film directed and created by Swedish filmmaker Magnus Jonsson, who is known for his visual curiosity and often exploring dark themes, in abstract and surreal worlds.

Garris reveals, “It’s a story about extreme grief and the levels a person is willing to go through to get rid of it. The story follows a main character through a traumatic car crash late one night in the woods that leaves his partner deceased, and from there you spiral with him into the depression and guilt that comes with being the cause of something so detrimental. This is the first time we really dove in and tried to create something sonically that evokes a different range of emotions and over all something that introduces tension and anxiety with a massive pay off. The story is told not only through words but through the music as well, which proved to be our biggest challenge in writing. Lyrically this story ended up being much more personal than we initially intended. We started with the idea to tell a fictional story but throughout the process, I found ways to incorporate real feelings of loss and mourning, as well as anger and self doubt. I’ve always been a very personal writer and this was originally a step away from that, into something more artistic. But in the end, it was just as therapeutic as writing a regular Knocked Loose record, and I think you’ll be able to hear that.”

Director and animator Magnus Jonsson tells, “I always want to create something that complements the music, works within its structures and hopefully enriches the experience for the audience. With a longer format around 21 minutes, covering 6 tracks, I knew this dark ghost story was a very interesting challenge to explore in animation. I took the story presented in the songs and anchored that into a visual world. I wanted to create an intense nightmare, focusing on the emotional states of Bryan’s main character. I created visuals that bring the audience deeper into this story of a spiraling descent into horror and destructive madness — Taking a minimalistic and sometimes even abstract approach to many parts of the image making, creating unease and an eerie atmosphere.”

A Tear expands on the narratives hinted at on A Different Shade of Blue, their highly lauded 2019 full-length that cemented them as one of heavy music’s most prominent acts. With quarantine upending their extensive touring schedule — “we’ve kind of been consistently on the road since 2014,” says Garris — the group found themselves in early 2020 sequestered near their hometown of Louisville, in Oldham County, Kentucky. By June, they were hunkered down in a cabin in Pigeon Forge, Tennessee, focused on writing a concept album. By the end of September they had finished recording A Tear in the Fabric of Life.

Musically, the songs were written in order and speak to each other. On the opener, “Where Light Divides the Holler,” ambient sounds of a radio switching give way to a harsh, punishing breakdown. “Permanent,” the closer, is crushing, and ends in a majestic, almost soundtrack-like ring-out. In between there are new elements — guitars droning out, radio interludes, vocal-only suites — and the immediate heaviness listeners have come to expect from Knocked Loose. It’s hardcore, filtered through what Garris says is a more prominent death metal influence. The new sounds the band never tried before have the goal, guitarist Isaac Hale says, of making everything sound “more extreme and more abrasive.”

Which is saying something. Young, but accomplished — along with Garris and Hale, there’s Kevin Otten (bass) and Kevin “Pacsun” Kaine (drums), everyone in their mid to late twenties — the band’s been trading on heaviness for a while. “We’ve written a lot of songs,” says Hale, “and a lot of breakdowns.” Their discography — along with Blue, there’s Laugh Tracks, from 2016, both on Pure Noise, as well as a demo and a handful of singles — is full of them. Every record up to A Tear has been very much hardcore, building off its predecessor, adding some metal and higher emotional stakes. More growth means more heaviness. Says Hale, “nothing gets taken away.”

So too with A Tear, which is a massive progression, but not a departure. The end result feels like a stress test: six songs that speak to each other in a language that’s equal parts Phil Spector and death metal and that balance the tension between technical mastery and catchiness. This is Knocked Loose, distilled, and taking a leap.

A Tear in the Fabric of Life was recorded and produced by Will Putney. It’s available today via Pure Noise Records across all digital retailers. Vinyl formats will be available in-stores worldwide on December 17; Pre-order Here. Last week Knocked Loose wrapped up a massive, sold out headlining tour and will continue onwards this week in support of Gojira. Check below for a full list of dates and keep up with the latest on Knocked Loose’s Instagram here.