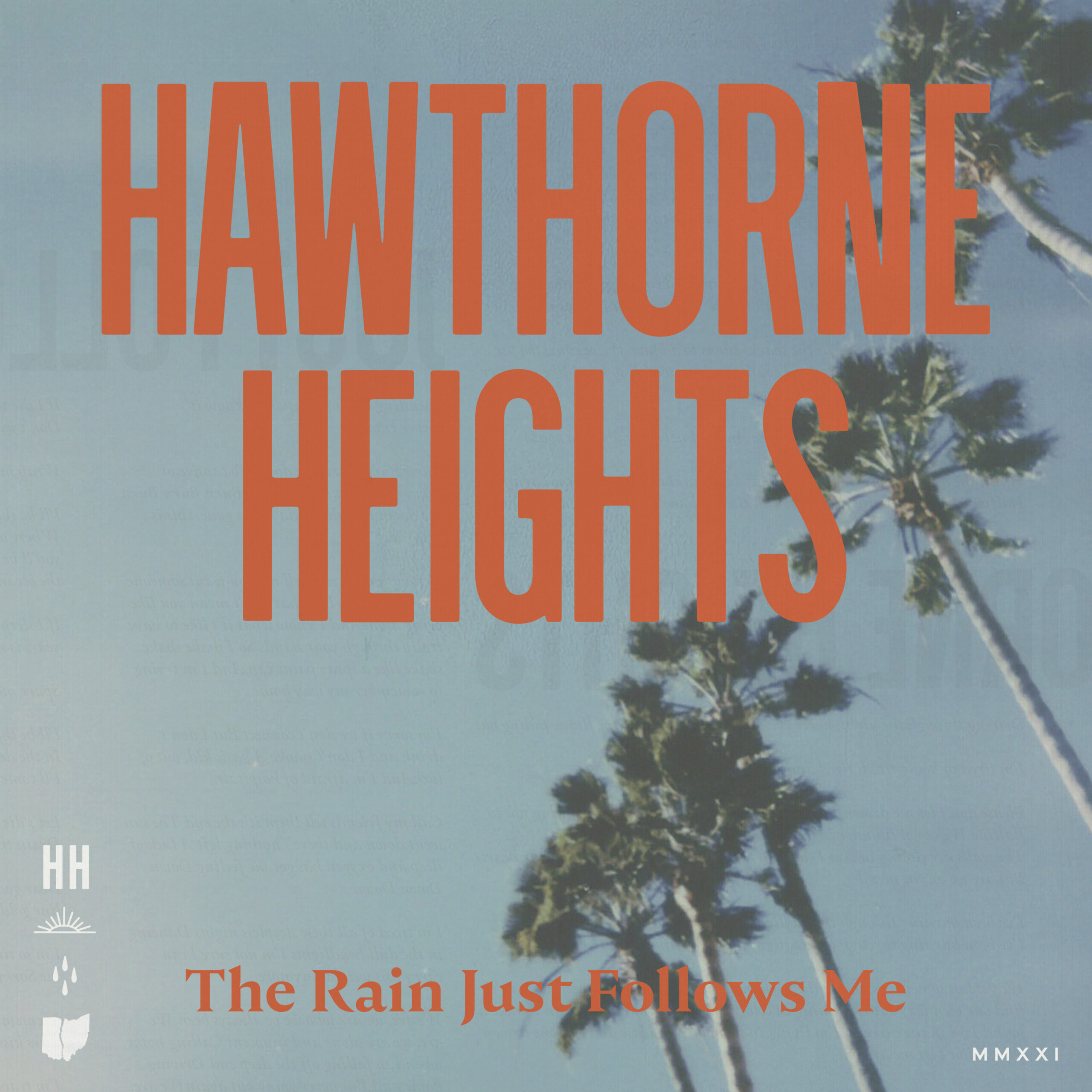 Hawthorne Heights have announced their eighth full-length album The Rain Just Follows Me will be released digitally on September 10, 2021 via Pure Noise Records.

Eager to hit the studio again as soon as possible after their 2018 release Bad Frequencies – and probably a bit naive about how much they could physically take – the writing sessions for LP8 took place in unusual places: in sound checks and dressing rooms, in far-flung rehearsal studios after marathon overnight drives. Hawthorne Heights weren’t just burning the candle at both ends; they were splitting it in two, then letting the flames engulf the smaller pieces completely

Almost immediately, the line between the end of the Bad Frequencies era and the beginning of a new one blurred to an unrecognizable Rorschach test. When it came time to decamp in Southern California with Grammy-winner Cameron Webb (Alkaline Trio, NOFX, Megadeth) behind the boards, things came to a head. Front man JT Woodruff and his bandmates were also undergoing a bigger identity crisis: Just who were they this many albums into their career?

The 11-track record stands as some of Woodruff’s most resonant writing to date, as he unravels themes of both physical and emotional distance as well as personal identity – anxieties so exacerbated by the last year that it’s incredible the album was completed before the pandemic hit. (“There’s so many undertones of what would happen over the next 16 months,” he says with a laugh. “I don’t know if that makes us the emo Nostradamus or what.”)

Singing lyrics like “I can feel my body breaking down, California sun. I can see the colors spiral out, nowhere left to run,” Woodruff tapped into the feeling of searching for something positive to cling to.

“When writing, I tend to dig through memories, both good and bad. In, Constant Dread, I was searching through one of my favorite tour memories. Warped Tour 2017, in the tour bus village. One of our favorite hardcore bands, Counterparts, was hosting karaoke. As I was standing there, Brendan hit play on Niki FM, and then threw me the microphone, and as I was singing my own song to a jury of my peers, I realized that I need to loosen up. This should be fun, not agony. When I thought about that moment, while laying bed in the throes of the terror-filled gaze of the moonlight, I knew we needed to put Brendan in this song. And I’m so glad he said yes, because absolutely crushes it. “

The Rain Just Follows Me can be pre-ordered at https://smarturl.it/hawthorneheightsoh and will also be released in stores with limited edition vinyl variants on October 22, 2021.

Most of all, this upcoming release is quintessentially Hawthorne Heights. It’s who they’ve always been – they just needed to push down the heartache and strife long enough to rediscover those intangible characteristics.

“We want to create the best songs that are accurate depictions of our lives and connect to other people through our songs,” Woodruff says. “I hope this record helps people understand that others out there are thinking like them – and thinking about them. Everyone gets poured on in life; we just want to provide an umbrella.”

Throughout their long and storied career as one of the most iconic emo acts of the new millennium, the quartet have overcome obstacles at every turn – but these roadblocks always seemed to come from external forces, from unscrupulous record labels and the shifting whims of fickle audiences to unimaginable personal tragedy threatening to derail them.

Despite the odds, Hawthorne Heights have overcome it all: earning two Gold albums (2004’s The Silence In Black And White and 2006’s If Only You Were Lonely), penning some of the genre’s most well-known songs (“Ohio Is For Lovers,” “Saying Sorry”), and remaining a hard-touring act nearly two decades after forming in Dayton, Ohio.